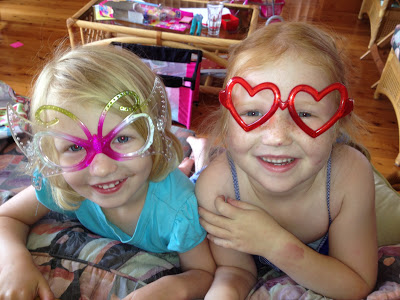 A little while ago a friend of mine was telling me about her little boy, he had had his eyesight screened at preschool and they had recommended that he have a full eye examination by an optometrist. Lo and behold he is longsighted and needs to wear glasses all the time.

The first time I saw him with his glasses on I made a really big deal about how cool he looked and how great it must be to see things clearly. His Mum was telling me he has been remarking on things all day like he’s seeing them properly for the very first time ‘oh wow Mum can you see that, that’s great’, ‘look at that Mum’. It was such a joy to watch the world open for him.

A week later I spoke to another friend who had just had her little boy’s grommets put in and when they got him home it was as if he was hearing things for the very first time, she put the dishwasher on and he came running up and pointed to the dishwasher and looked at her with amazement that it actually made a noise. It was so heart warming to hear such positivity.

Last week we got a recommendation that our Muddy Pixie see an optometrist, nothing major but after having both these conversations with parents I was straight on the phone to book and appointment. I got off the phone and a day later decided to also book in my Muddy Organiser just to be sure she has no problems, yes I know it’s overkill and it’s only because she’s been holding her book too close to her face, but I’d rather be safe than sorry down the track…..


Warning: count(): Parameter must be an array or an object that implements Countable in /nfs/c09/h01/mnt/140699/domains/muddyfarm.com/html/wp-includes/class-wp-comment-query.php on line 405